In 2013, Adelaide mother-of-three Taryn Brumfitt posted her before-and-after pregnancy photo. The ‘before’ was her fit physique on stage in a bodybuilding competition.  It was seen by more than 100 million people and sparked an international media frenzy.  After realising there was a global body-hating epidemic, Taryn felt compelled to find answers.  Embrace follows the Body Image Movement activist as she travels the globe interviewing experts, women in the street and celebrities about the alarming issue of body image that are seen in people of all body types.

Your before-and-after photo earned 100 million Facebook views and you were invited on talk shows.  What was that like?  It was quite overwhelming.  It was an interesting time.  It was the first time I had done anything that had gone viral so it was a new thing for me to experience but I was really grateful for the opportunity to be able to have a platform to share what is a very important subject – body image. It’s not just my story, but the story of many women around the world.

So why make a documentary?  Because four-minute TV interviews was just not enough to convey my story.  It was important for me to share the story of how and why this is such a problem for women everywhere.  Plus, I’ve been a photographer for ten years and I’m a natural storyteller.  So bringing those two together, I thought why not make a documentary?  My first time directing, so that was very interesting.  Quite stressful and challenging, but we arrived here and the film’s in good shape

How was the Kickstarter process?  I made a four-and-a-half minute video that went very viral.  23 million views and supported by Ashton Kutcher, Rosie O’Donnell, Ricki Lake and other celebrities.  All of that’s pretty helpful when you’re trying to get a message out there, but the video resonated with people and they just wanted to share it.  They were talking about it, it made them cry, and they understood the pain of hating their bodies.  They wanted to be part of a project that was going to create change.

Where does this documentary go, who do we meet and what is being discussed?  We go everywhere.  Dominican Republic, France, Germany, Austria, United Kingdom, Canada, America.  We travel right around the world interviewing celebrities, everyday people, talk show hosts, editors of magazines, professors, founders of every health and size movement, photographers, you name it.  Also, we meet inspiring women in Australia like Turia Pitt who has an incredible story.

How did you get celebrities such as Ricki Lake and Amanda De Cadenet [actress and TV presenter] to appear in your documentary?  They reached out to me to support the Kickstarter campaign.  I’m always looking for opportunities and I thought “Wow, it will be great to have Ricki Lake”.  So when she reached out to me, I reached straight back and said, “Hey, do you want to be part of the film”.  She replied, “Yep, come to LA, come to my home”.  Very gracious, down-to-earth lovely woman.

How does one overcome body-loathing?  What is your advice?  A lot of it you’ll find in the film.  We find out not just what I think and what the Body Image Movement suggests in terms of embracing your body, but we hear it from all those amazing people that we interview.  I think one of the things about the film that people are loving is the diverse range of characters that are in the film.  Not everyone is going to relate to Harnaam, the bearded lady in London, but they might resonate with someone more hard-hitting like Mia Freedman [journalist and blogger, Mamamia] who says it like it is.  So there’s so much advice that anyone can get from the film.

Do you think today’s culture of body shaming has reached epic proportions?  Without question.  There’s a global epidemic of body shaming and body hating.  I discovered that and you’ll see that throughout the film.  When I interview women on the street, it doesn’t matter if you’re in Paris, Vancouver or London, the messages and the stories are still the same.  It’s a universal problem.

You receive thousands of emails from people who are dissatisfied with their bodies.  It must be emotional reading them.  Of course they are.  Listening to people’s personal stories on tragic things that have happened to them that led them down the path of hating themselves.  As a woman, mother and someone who loves people, I can’t help but feel invested in every story that I read.  In the beginning, there was a woman who suffered sexual abuse as a child and she never shared that with anyone.  Not one person and she shared it with me.  That was very difficult.  With those stories comes a level responsibility and it’s one of the motivations for the film.

What was the hardest thing about making this film?  Being away from my husband and three kids.  I love being a mum, so being away from them was pretty heartbreaking.  That’s from a personal perspective.  Being on the road and listening to those stories of heartbreak from women everywhere I went was pretty taxing.  I would head to my hotel room after a day of filming and just feel so sad, but it actually motivates me.  It motivates me to get the message out there more and to fight the marketeers and global corporations that prey on women’s insecurities just for their financial gain.

What effect do you hope Embrace will have on audiences?  What I want it to do is start a conversation.  I want people, and women in particular, to empower themselves and create change within themselves.  They don’t need to buy into these messages that makes them feel bad about themselves.  I would love people to tap into some more gratitude for all the things they do have and to focus more on how our bodies feel as oppose to what they look like.  We need to get some balance back.

You’ve written the book Embrace, you’re running the Body Image Movement blog, and you’re promoting the documentary across Australia.  What’s next in store?  With the Body Image Movement, I do whatever serves the mission of the movement which is to create global change.  I’ll be writing a second book.  In my seminars Developing Daughters/Supporting Sons, it’s my great passion to get on a stage and share stories with people.  Maybe another documentary down the track.  All high schools will see the film and study guides will be rolled out early next year.  Launching campaigns to change laws, particularly photoshopping in this country.  I believe you can open up a magazine and see a hundred instances of false advertising.  There are social, political, educational impact strategies that’ll keep me busy, probably for a lifetime. 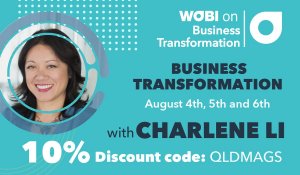 Open
Another of our favourite Brisbane dining precincts

Open
Fashionistas get ready. Burberry is opening in Que