The newly completed Omega Apartments in popular inner-city suburb Bowen Hills is standing out for its affordable prices, liveable designs and prime location, with more than two thirds of apartment sales in 2020 purchased by first home buyers.

Brisbane couple Dario and Karine Fiorino were impressed by the overall quality of Omega Apartments, the building’s extensive amenities and the large wrap-around balcony of their new two-bedroom, two-bathroom terrace apartment. Dario, an executive chef for a five star hotel, and procurement manager Karine, decided on their apartment at Omega after searching throughout Brisbane City for a first home that met all their needs. They were delighted to find Omega offered large apartments with high quality fittings and finishes and entertainer balconies in close proximity to their jobs in the city.

The building’s resort-style amenities – a subtropical sky garden and horizon-edge pool on the rooftop, plus a multipurpose room and two-level gym within the building – were a bonus. Dario and Karine chose a terrace apartment on level 5 for the abundance of outdoor space on their 66sqm balcony that offers plenty of greenery, privacy and spectacular views of Brisbane City and the historic RNA Showgrounds.

“Omega stood out for us when first saw it online. The building seemed very nice and the price was good, so we had a look and loved the apartment straight away,” Dario said. “With our jobs we have lots of opportunities to live and work anywhere in the world, but we love Brisbane and want to stay, so this is where we decided to buy a property. Buying our first home was a way for us to settle down.”

Luxury apartment marketing agency TOTAL Property Group is managing the sales of Omega Apartments’ remaining one and two-bedroom apartments and reported a significant spike in interest from first home buyers attracted to the starting price of $390,000. The team has been receiving a large volume of inquiry from first home buyers who have been weighing up the benefits of owning over renting during months of social restrictions.

TOTAL Property Group Managing Director Adrian Parsons said record low interest rates and Queensland’s First Home Owners’ Grant were encouraging first homebuyers into the market, as people rethink their priorities and plans for the future. “There has been an increase in inquiry from first home buyers who have been weighing up their options, as Omega falls within the parameters of the Queensland Government’s First Home Owners’ Grant,” he said. “While first home buyers in a position to benefit from government initiatives are taking the steps to do so, discerning apartment purchasers are recognising this limited opportunity to own a highly specced and spacious apartment in a prime inner-city location.”

Mr Parsons said most apartment buyers based their decisions on building quality, apartment finishes, location and lifestyle attributes, with many considering completed developments to move in straight away. “We believe the Covid-19 has caused a shift in thinking among professionals who have been renting while all their discretionary spend went on travel and lifestyle,” he said. “There’s a lot of activity from first home buyers who have gone from being uninterested in home ownership to seeking their own place for a sense of stability and to take advantage of the low interest rates. Now that people are starting to realise the value of owning their own home, many are finding they don’t have to give up their lifestyle at Omega because it is all there right on their doorstep and in the building.”

Given its locational attributes, large apartments, keen pricing, and proximity to jobs and public transport, Omega Apartments has proven to be very attractive to all types of households from first home buyers to downsizers. Omega Apartments’ developers, Simon Gundelach and Alistair Harvey of HG Developments, specialise in creating quality residential buildings in prime locations with a focus on larger living spaces and luxurious elements that deliver on lifestyle.

“When we develop our vision for a site it is always the goal to create spacious, liveable apartments that maximise natural light and cross-ventilation, with high levels of insulation and solar passive design to reduce noise levels and keep temperatures naturally comfortable,” Mr Gundelach said.

Omega Apartments features 130 spacious apartments across 17 levels, consisting of 42 one-bedroom apartments, 10 one-bedrooms plus multi-purpose rooms, 52 two-bedroom apartments and 26 two-bedrooms plus a study, all with exclusive use of high-quality recreational areas, including a solar-powered subtropical roof-top sky garden, horizon-edge pool with city skyline views, a gas fire pit and three separate barbecue areas, plus a two-level gymnasium and multipurpose room within the building.

Ideally positioned at 61 Brookes Street just 1km from Brisbane’s CBD in the high-demand RNA Showgrounds precinct of Bowen Hills, Omega is also within walking distance of the burgeoning King Street hub, Gasworks precinct and James Street. The Brisbane Airport is just a 12-minute drive from Omega, which is well serviced by significant transport infrastructure, including the existing Bowen Hills train station and the new Exhibition train station being built as part of the State Government’s Cross River Rail project.

To arrange an inspection of the three display apartments, open by appointment every day including after-hours and weekends phone TOTAL Property Group on 1300 393 855 or go to www.omegabrisbane.com.au. 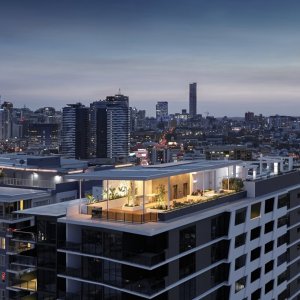 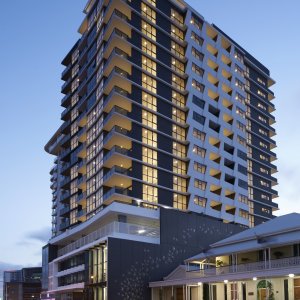 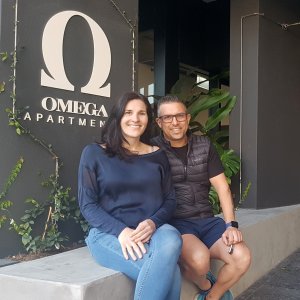 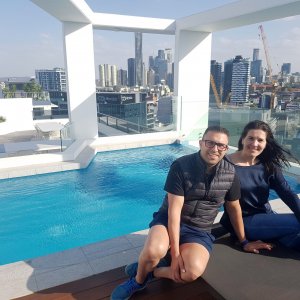 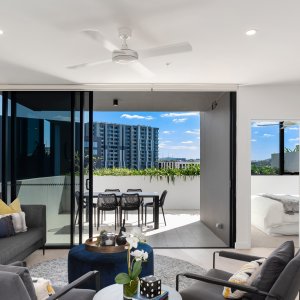 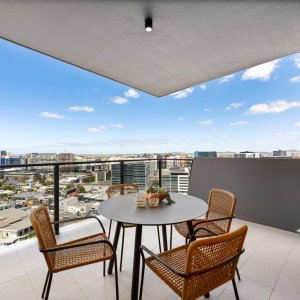 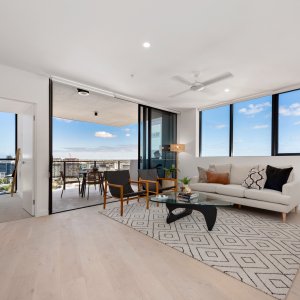 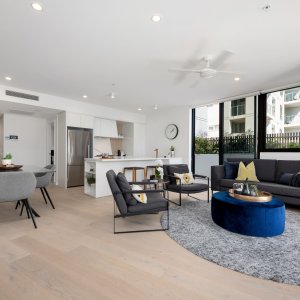 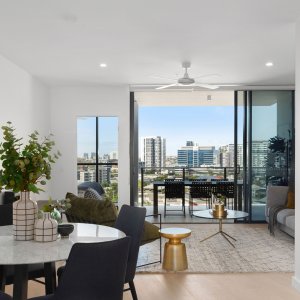