Sydney-based designer Zachary Hanna has won the Mercedes-Benz Design Award 2018 with his entry, Stack, an innovative hybrid table lamp and side table fulfilling the 2018 brief to design a product with a sustainability angle for living spaces. He was announced as the winner of the Mercedes-Benz Design Award 2018 at an industry event at the Cult Design Showroom in Chippendale, Sydney, on Wednesday, 27 February.

Hanna has a background in product and furniture design and has worked for leading Australian industrial designer Adam Goodrum. He was also the winner of Cult Design Journey in 2016 and the Alessi Design Award in 2018. His winning design, Stack, is a table lamp, bookcase and side table in one, a combination of three pieces of furniture often found together in the living room. Designed with utility in mind, Stack is a surface for books, magazines, laptops or food and drink, with a light above.

Hanna also impressed judges with his approach to sustainability, a key part of the brief. He has built the piece entirely from renewable ash and walnut timber manufactured under certification schemes. The light is provided by LEDs, which consume less power and have a longer lifespan than traditional lighting. “Zac’s design met our brief perfectly. He’s used sustainable materials innovatively and encapsulated three products in one, giving us a unique and simplified solution to home living. Stack combines functional design with a minimalist aesthetic and is a great example of Australian design that fits well into our new contemporary NAU collection that offers furniture, lighting and accessories by a collective of Australia’s alented and spirited designers,” says judge Richard Munao of Cult Design. The Mercedes-Benz Design Award competition called for entries at the end of 2018 and closed in early January 2019. Three finalists were announced in January: Hanna, James Walsh for his design Blocks and Tom Hewitt for his O-KI Lounge Chair.

“All three finalists offered beautifully elegant and refined solutions with longevity in mind. In the end it was a tough decision, but Zac’s piece seemed to harmonise with the NAU collection and offer a unique point of difference in the market,” says Tom Fereday, winner of the Mercedes-Benz Design Award in 2017 and also a judge for this year’s event.

Cult Design will prototype, produce and sell Stack as a part of its NAU collection. And Hanna will be mentored by Munao, Andre Dutkowski from Mercedes-Benz Australia, Adele Winteridge of Foolscap Studio and Fereday. Hanna will also be loaned a Mercedes-Benz to drive for the rest of 2019.

Readers also enjoyed this story about the new restaurant Nota. 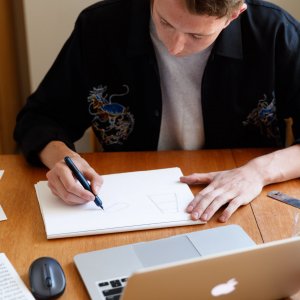 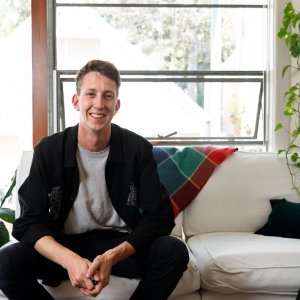