Gold Coast fine dining and gin bar Old Tom Restaurant and Bar has appointed 21 year old Cody McKavanagh as its new Head Chef. Despite the young age, Cody already has extensive experiences in the kitchen and is seen as a “culinary genius”.

Cody started his career at the age of 14 when he undertook a Brisbane apprenticeship studying under Matt Moran, before moving to Norway where he worked at Michelin star restaurant Maaemo, and then landed a coveted role working at Heston Blumenthal‘s world famous, The Fat Duck. “Whilst working under Heston Blumenthal I was changed with helping to concept and create a menu designed for astronauts living at the International Space Station,” Cody said. Although sending food into out of space was one of the most difficult and challenging work in Cody’s career, he thought it was an unforgettable and rewarding experience.

Cody worked at Biota in the Southern Highlands after coming back to Australia, where he discovered his passion for foraging and learnt how to grow his produce and source food in the wild. His addition to the all star team has also brought along with the new autumn menu which is designed to showcase the best local foraged Australian produce paired with ingredients from across the world. He used his knowledge to pair locally sourced mushrooms from the Gold Coast Hinterland with moss that grows in Springbrook, and Sturgeon Caviar imported from Russia with kelp from Kingscliff. “I am now working on a 5-course degustation where diners can go on a culinary journey from the beach to the hinterland sampling everything from sea lettuce to a chocolate tart finished with Spanish truffles and double cream,” he said.

Cody highly recommended his favourite pork dish with green mandarin caramel and Brussel sprouts and the restaurant’s most popular QLD Mud Crab Toastie, as well as the dessert cheese ice-cream with native plum and lime which is served with nitrogen delighting our senses. 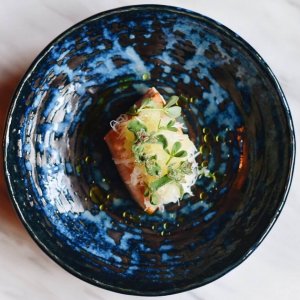 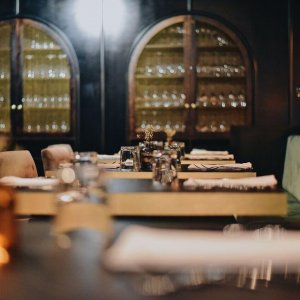