Published on February 23, 2018 | in Play
Riding a bike along the Ipswich Motorway between Rocklea and Darra will soon be much safer thanks to the inclusion of cycleways in the $400 million upgrade. Detailed designs for the project, which is jointly funded by the State and Federal Governments, were recently released.

“The detailed designs include a protected two-way bikeway from Granard Road to Oxley Creek, shared paths on the new bridges over Oxley Creek, and cycleway access via the underpass to Granard Road,” Savage said.

“We commend the State and Federal Governments for investing in active transport and delivering value for money on one of Queensland’s major motorways.”

The section of Ipswich Motorway being upgraded is a vital connection between large population centres and will complete the link in the western cycling corridor.

“This investment will result in thousands of extra cycle trips per week, shortening travel times and enhancing the reliability and safety of the local transport network,” Savage stated.

The upgrade is part of the master plan to finish the full 19 kilometre upgrade of the Ipswich Motorway that will connect with completed upgrades along the western corridor.

“The provision of great cycleway infrastructure in major projects is a credit to the Queensland Department of Transport and Main Roads,” Savage said.

“We congratulate the Government for its leadership on active transport in major projects statewide.”

The approved designs will ensure cyclists and pedestrians are provided with safer access to and from the motorway. When the project is completed, cycling will be a viable and seamless transport mode for the local community, improving health and wellbeing, and vastly improving the sustainability of the transport network. 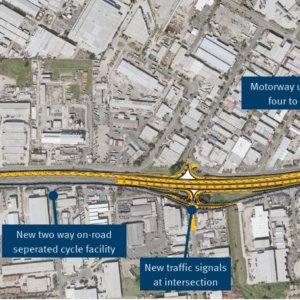