Boasting an enviable view of the Storey Bridge and a meticulously well-appointed interior, Otto Ristorante is one of Brisbane’s best gastro-havens. The Italian restaurant first opened its doors in 2011 in the Sydney habour-side suburb of Woolloomoolloo. The restaurant’s fine Italian cuisine and faultless service revamped the Sydney food scene, so much so that Brisbane was blessed with its very own Otto in 2016. We were invited to visit Otto Brisbane, located on Queen Street, to celebrate the start of truffle season with head chef Will Cowper and restaurant manager Alan Hunter.

Otto sources its black Manjimup truffles from Western Australia, and as Cowper presented each of the four courses, he excitedly explained how truffles had been incorporated into each dish. We started the night with appetisers to share, including Caprino: woodside goats curd in a pane carasau cone and festooned with truffle honey. The sweetness of the honey eagerly complemented the saltiness of the curd, which was so smooth it seemed to melt in the mouth. Pan fried gnocchi soon followed, as well as truffle fettuccine seasoned with parmesan cheese and raw egg. The gnocchi garnered a collective sigh from the table; the outside was crispy from the pan, but the inside was plump and buoyant, pulling apart like freshly baked artisan dough.

The night was perfectly wrapped up with truffle gelato on a bed of hazelnut crumb and himalayan sea salt. While each dish was delightful in its own unique way, it was the truffle that reigned king over the Otto kitchen. The truffle’s earthy aroma quietly lingered behind each bite, lending a hand to the other flavours only when they called for help. Like an old friend, the mushroom-like richness of the truffle restrained the other flavours when they got too rowdy, and supported them when they shied away from the palette.

Otto Ristorante has ushered in the truffle season with respect and enthusiasm, set to host its five course truffle degustation with matched wine on Wednesday 4 July. 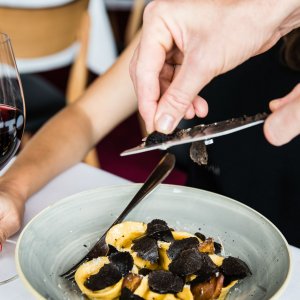 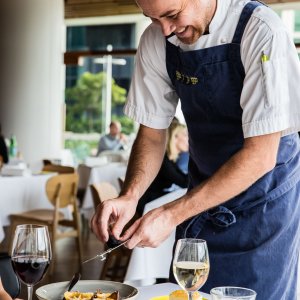 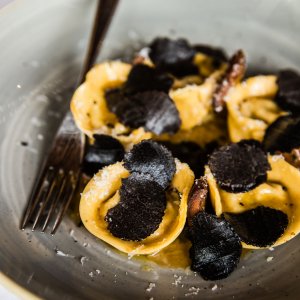