The pair met nearly 15 years ago. Jason remembers the meeting fondly at the opening of a Fortitude Valley nightclub. “Ebony was a waitress for us — she did drop a lot of plates which sure did make her memorable,” he chuckled. It was not until they both found themselves in Canberra on separate work trips that Jason suggested dinner. From the first few dates, he was smitten. “We went into 12 months of long distance dating which was terrible and terrific all at the same time. You have no choice but to take it slow and really get to know someone. The time you do have you really lean into it to make it special.” And he certainly made Ebony’s birthday special, hiring a yacht at sunset complete with fine Champagne. Between the bubbles and the romance, Jason’s mind was set — he would quit his job in Canberra and move to Brisbane.

Jason admits finding the perfect ring for Ebony was the hardest thing he ever had to do. Finding The Diamond Hunter was a stroke of luck, in the end designing a long radiant cut diamond set in a white gold diamond band. The rest might be history, but to Ebony, the engagement was a surprise. “We were in Bali for a holiday and we went for a really nice dinner when Jason pulled out a ring and asked the question. In retrospect I probably should have seen it coming! I think back and there were a few hints, but I was oblivious.”

Matrimony for the duo was never going to be conventional. They confess that while they love attending weddings, having their own big event was never part of the plan. Eloping to Los Angeles however, was. In hindsight, Jason buying Ebony two tickets to Los Angeles for her birthday before he proposed, mentioning it was his intention to get married there, should have tipped Ebony off. “I’m still smiling thinking about what a perfect day we had in LA,” said Jason. “Santa Monica, West Hollywood, The Sunset Marquis, The Bungalow and the Champagne what a day.” In Ebony’s words, the pair “just wanted a super fun party”, adding Jason’s “touch of paradise and a sprinkle of rock and roll”, culminated both in their road trip across the city, and in being wed by a Hugh Hefner officiant. Ebony wore an ivory strapless mini with a sweetheart neckline and lace peplum she “randomly tried on one day” from Sheike. Jason donned a navy Suit Supply tuxedo.

Marrying mere hours after landing in Los Angeles, the couple revelled in the untraditional, getting ready together before the ceremony, and sharing a burger for dinner at a local bar. “Total strangers were just so happy for us,” reminisced Ebony of their gallivants around town, snapping memories with local photographers Isaiah and Taylor.
Finally, in a toast to where it all began, Ebony and Jason popped a bottle of Dom Perignon atop Inspiration Point at sunset. 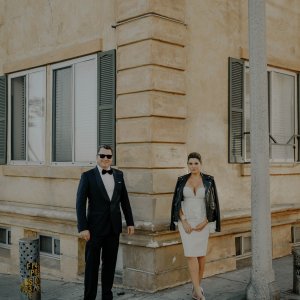 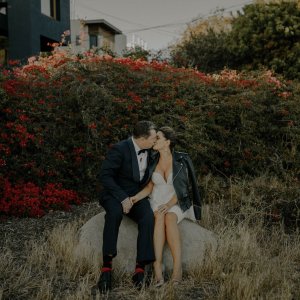 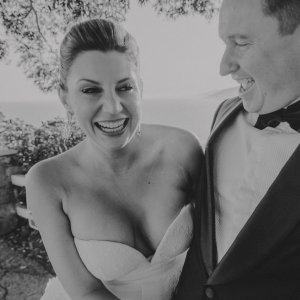 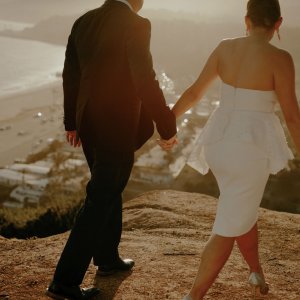 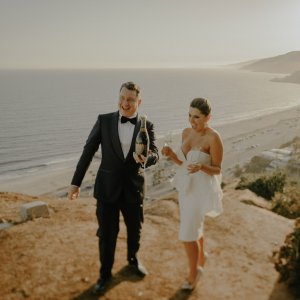 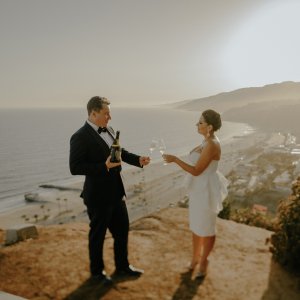 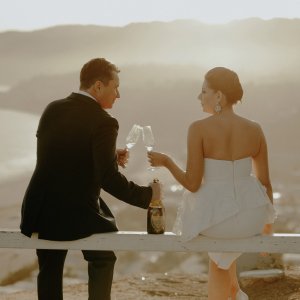 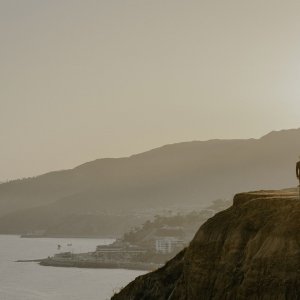 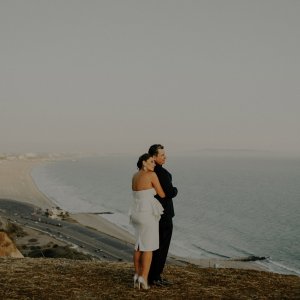 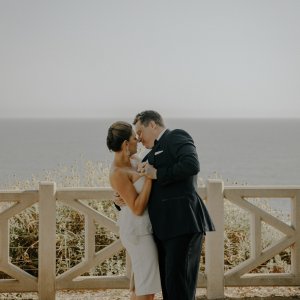 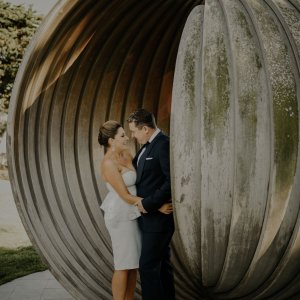 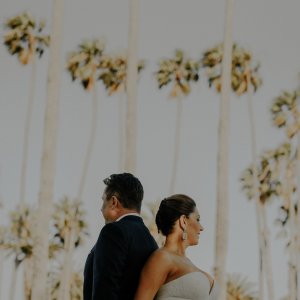 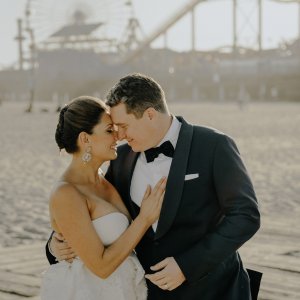 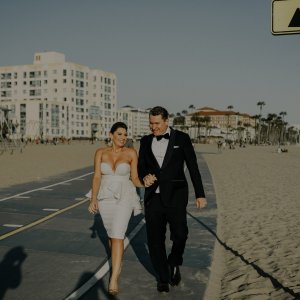 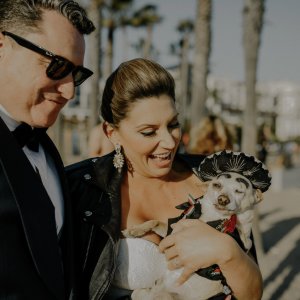